I got asked to finish up a backdrop recently and so I dragged out the dollar store paints to see if I might be up to the task. Given how little I paint and how bad I am I decided to use one of those rough and cheap 24″ panels that Opus sells. That way, if I am too awful, I won’t waste any time prepping. 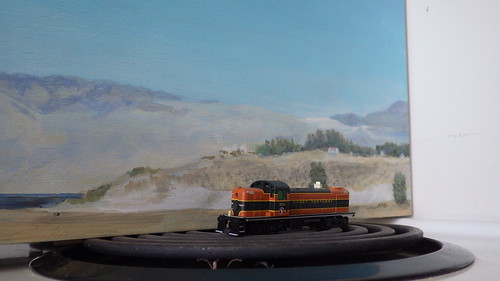 More or less blocked out.

As it turns out, I am pretty awful but likely/hopefully still up to the task. I  think with continued practice my draftsmanship will return somewhat and then I’ll just be fighting the acrylic. I draw very infrequently and almost never paint anymore but even at that I can tell that I should be using better materials for the finished job. Dollar store stuff is very inconsistent and in general a bad move when you don’t know what the next move should be. With decent materials you don’t get the haywire colour-shifting as the paint dries and there is some semblance of opacity.*  The way it looked wet versus dry meant I spent a lot of time repainting things and still ending up in no man’s land. It is kind of like drawing with an HB pencil. Someone with skill can do it – someone without can’t. I’m no Helnwein.

The image I worked from was taken near Wenatchee, WA, around the east end of Appleyard, so not too far from where the second sub ends. I chose the scene because it is similar in form and colour to the area I’d be working on at the other layout but I also wanted see what it would be like with a little omaha orange mixed in. Even with just a shell I think the colour combo is quite nice. Makes me think of the Wenatchee-Oroville or Mansfield branches.

*Even good acrylics colour-shift and are somewhat translucent – just not anywhere near to the degree being discussed here.

2 thoughts on “Hell freezes over”