Dean O’Neil was asking about workbenches on the NPModelersyahoo group and I’ve had a post in the wings since summer, so, belatedly, here it is:

I’m running a split shop with all of the heavy, dirty stuff happening at my father’s shop and the light, clean stuff at my place.  My most recent workbench is plain and functional,  built using regular 2X4s with a decent 3/4” ply top and 1/2″ ply backboard to keep things from rolling down the back or splashing against the wall. The need for some modularity meant that I screwed and bolted everything together  versus gluing and stapling or gluing and screwing the top as I would normally. With cross bracing the table is sturdy enough for my light work. In the recent Victoria shaker everything jiggled around for forty seconds (I must be on top of a garbage dump) but otherwise stayed put. I was very relieved that the feet (visible near the stool in the picture above) did their job and kept my stuff upright.

I stand for much of my work  and opted for a higher top and that in turn allowed the use of some 60 year old furniture for under table storage. I had thought about placing tools on the backboard but they just rattle around when I run machines or hacksaw so I keep them in the drawers for the most part. A fairly old laptop is mounted flat on the backboard, mostly for CNC use, but it also sees duty as a picture display and a CAD viewer. As the computer runs a machine it is air gapped but this is mostly a formality as I don’t have internet access. The front two inches of the table are unsupported and this allows easy mounting of small vises and blocks for swing-arm mounted lighting. Being able to clamp clear across the front makes the arrangements customizable to the task at hand.

Those magnifying lights that everybody sells are very, very handy and, I would say, a must have for anyone doing small work. Quite often the difference between acceptable and unacceptable work on my part is related to how much light I have on offer. It can be night and day in terms of results so whatever you can spend on lighting is money well spent in my books. Something else I do whenever I can is to paint everything in the work area white. I’m not picky about sheen and I don’t need an off-white as many people recommend. The bench pictured hasn’t been painted yet and I regret that decision quite often. Inertia is the only thing holding up the paint job.

On Rene’ Gourley’s Pembroke87 blog he mentioned looking around for a metal crew to drive his 4-4-0 . I wondered aloud whether he might make a set of masters and cast them in Cerro-bend. Curious, I spent about 90 minutes carving hard machinable wax (Matt brand hard green machinable) into something mammalian. I was aiming for a Columbian Blacktail deer but, working from memory, I drilled a hole in the wrong place early on and ended up putting the front legs too far forward. Then  I levered some of the wax and broke the front legs. I also snapped the head off twice. Each mistake meant that I was less able to work the wax until eventually I was forced to abandon. It ‘s very rough – this hardness chips like ice but that very trait makes it hold fine detail (tiny thin legs, little ears, etc). Maybe I need to try the purple (medium) or blue (soft) wax.  Maybe I just need to use a moderately sharp blade instead of a dull one! 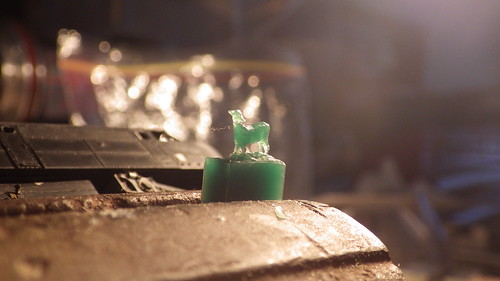 Whatever the result, I’m interested where this might lead. The animal’s body would be  a little over 1/4″ high had I been able to take the legs to hoof level – definitely on the small side for a freehand wax model – but it never seemed daunting which is encouraging. At the roughing level it is just easy enough. I don’t know what it will be like to take this sort of thing to a suitable level of finish but I guess that is step two. For that I’ve collected images to work from instead of going by memory.

A while back I mentioned meeting a fellow who lived in Grotto during the fifties who went on to provide me with a photocopy of an AFE for Grotto. In the post I thought outloud about the Standard Oil Company spur and whether it might have still been in use in the late fifties and early nineteen-sixties. Well, four months later I have my answer: no, it was not in use. Thanks to Roger Burrows I now know that it came out per AFE 85727, way back in 1954, some ten years before this blog gets serious.

As these things go I’d built the layout section without provisions for the spur and actually succeeded in getting the rails nice and straight through the area that would have been ripped up had the spur lasted until the layout’s era. Now that I’m finally right about something that works in my favour I can’t help but wonder whether I’d be better off including it anyways. I know I won’t, being resistant to progress of that sort, but the thought should count for something.

Oh, and it took four months to figure out that the track was gone because I used the site search on the gn-npjointarchive.org instead of searching the AFE headings themselves. Roger taught me this. If you’re looking for Grotto and you only get 13 hits, that’s why.