So in the last installment of the depot renovation I mentioned I was mostly happy with how the chimney was constituted. That’s still true but I thought I might as well show how I make them from sheet. They’re a little fiddly but with the help of a few gadgets from the shop go together in a reasonable amount of time.

Over the years I’ve come to accept that if I want a chimney to look OK I use .010″ sheet for the courses and .005″ for the mortar. Strictly speaking that isn’t the right ratio for the chimneys I’m modelling but both sizes are commonly available and look good enough most of the time.

The job starts out with strip making. I use my calipers to measure down and make a small divot either side of styrene sheet. A quick rub with a pencil helps indicate where the divots are and then a ruler is placed along the top edge of the divots using a drop down magnifying light (3X power). With my left hand holding the ruler I make two quick scores with a sharp knife and then snapped the pieces off checking for final size. Do this several times for either sheet and you’ll be ready for chopping. For Chopping I use a “Chopper” and make a bunch of little squares.

Those little squares will go together one after the other, alternating .005″, .010″, wedding cake style to achieve the chimney we’re after. To make life easier I pre glue as many of them together in .005 plus .010″ pairs. A flat surface with a little solvent seems best to keep them from flying away so I use a bit of steel or glass. Once the pairs are solidified I prick them off with a hobby knife and load them into the fixture shown below. It’s just a bit of bar I milled on the lathe but it helps keep two edges clean and square. These are the reference edges. 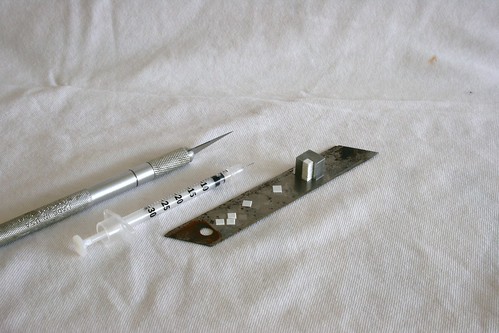 Once dry I clean up any residual out of squareness on the exposed edges with a good fine file. Once square it is time to glue a handle to the base and then make a little brick scribing gauge. The vertical mortar in this case has to be made with small knife cuts and an appropriate width stick of styrene works well enough in determining the individual brick lengths. This is the most difficult part of the operation but going slowly we can avoid a lot of unsightly errors. A few errant cuts here and there can be prodded back together with a knife and additional solvent cement. Follow the knife cuts with either a slightly dull hobby knife or a very thin skrawker. The top of the flue was made out of .010″ styrene strip and glued together as a unit on the steel gluing surface prior to installing on the chimney proper.

With everything glued up and de-burred the chimney is cleaned and readied for painting. I like Tamiya and Vallejo acrylic paints for these sorts of items. There are lots of other choices out there but I like these two because they are available everywhere,easy to use on styrene and I’m not currently sensitized to them. Years in a paint studio and decades of workplace exposure means that I have to take safety precautions wherever I can. I use the Tamiya as a base, first with a dirty mortar colour and then once that was dry and ready brought out the Vallejo to spot the bricks. They seemed very red in the photos I had along with highlights of white  and a bit of umber. I had some similar bricks in my brick collection and used them as a guide along with the photos. Working slightly wet is one of the advantages of Vallejo and provided you use their binder and glazes the bond is decent. I’ve no particular technique – just look at what is there and alter your mark making until you’ve got something that’s works all right. If you’re shaky (I am) use the edge of a desk as a maul stick to support your arms and isolate your movements. As always, use lots of light and magnification. 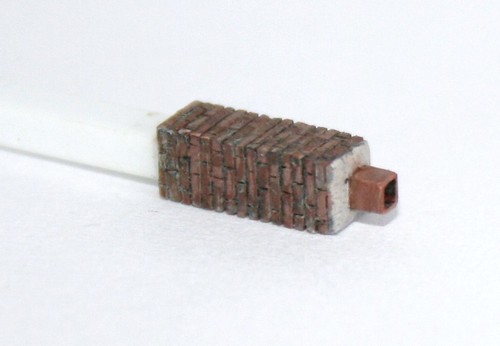 In the photo above it looks like I need to go back in with the mortar colour and clean up where the brick colour creeped up over the top of the chimney. I need to learn to stay in the lines. Some water lines on the top wouldn’t be out of order either. Incidentally the top of the flue was painted interior first then the red base and finally a lighter red was spotted to hopefully represent a bit of fresh cracking and chipping. This lighter colour is quite opaque and it helped cover any mess left behind from painting the interior. I’ll spray a flat over the works when I’m happy with it. 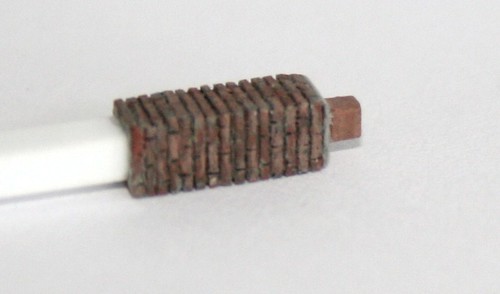 I built the Grotto, Washington depot a long, long time ago.  I think I found out about Grotto by looking at a postwar track diagram and coming into the possession of a print by the late Al Mitchell (a very, very good man who died much too soon). Al’s print was of a rather sad looking little depot sometime after the cement plant shut down. A  few windows were boarded up with plywood and the trim was in rough shape or missing altogether.  In short it looked like a building that begged to be modelled.  (There’s just such a  Robert Johnston shot over on the GN-NP Joint Archive linked to here: http://www.gn-npjointarchive.org/GNRHSDepot/GNRHS.Depot.42.50.02.jpg). As I’d done Scenic depot in a similar neglected fashion Grotto seemed like a good next step. In short order  a model was constructed and given a coat of white paint with green trimmed window of acetate or packaging – whatever was to hand. The completed styrene components are shown below. 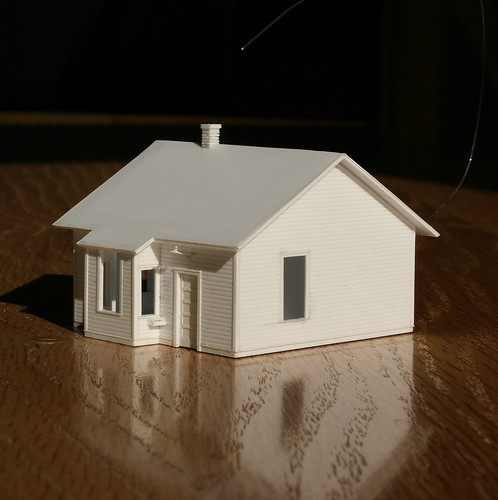 In the years since then the model suffered a series of unfortunate incidents. First up was a trip to central Washington where the roof suffered lasting harm in the high summer heat. After that the depot was subjected to a lot mistreatment at my own hands, used as stand in for any planning cause that used the very standard 24’X24′ footprint of the depot.  When planning Grotto the module, the depot was of course a perfect stand-in, only on closer inspection did I realize the amount of work that lay ahead. As a result most of the rest of this post reads like a tale of what not to do…

For all of its defects the depot follows typical rugged milk carton construction – the structure walls forming a socket for the removable roof which has its own set of internal gables. As first constructed the model roof used a layering of styrene followed by contact cement, thin thin vellum or tissue, PVA and finally shingles cut from paper bag strips, slit, chalked and stained with acrylic inks. As one can imagine , even using the thinnest of materials you get a lot of stack-up. The contact cement in particular caused a lot of grief. On subsequent roofing projects I tried creating a recess to hold most of the stack within  the barge boards but when this idea failed on roofs with open rafter tails I changed over to painted masking tape. I figured that I wanted to do more than just make shingles and with masking tape you make a streaky brown-grey mess, cut it into strips and lay it down either on the roof substrate or in my case on an indexed plexiglass sheet, the lot then being unstuck as a group and repositioned on the roof proper. Then you’re done.

The problem with masking tape, apart from the possibility of de-lamination, is that while thin on application, subsequent handling causes the cut line along the gable ends to recede into a slight bulge. You can see what I am talking about in the photo of the Skykomish A-frame. In this case I’d gone to the trouble of recessing the contact cement and the vellum the tape shingles attached to only to have the shingles bulge to almost two scale inches at the lap which is double what they were starting out. In the case of the A frame I’m not as worried as it has much thicker barn shakes and not the decent cedar seen on a railway depot. For depots we need a better solution. 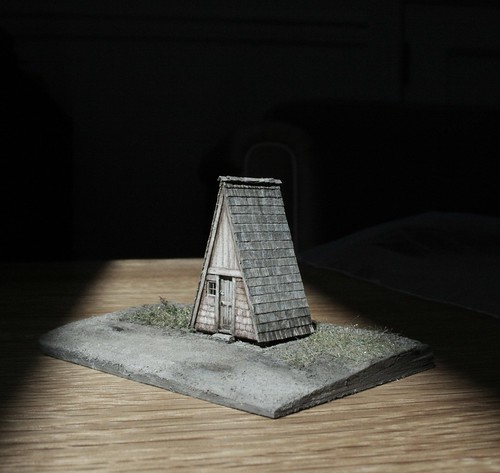 What to do… To be honest I still am not entirely sure but I had a small amount of experience modelling asphalt shingles as single .005″ styrene panels and so I figured why not try my hand at styrene cedar roofing. In styrene shingle panels I’m at least back to having a stable, more archival process. Unfortunately it doesn’t really do the job. The gable edge is half as thick of course but there isn’t the look of one shingle on top of the other, of the heave that shingles get after about a season. It is also tremendously demanding work scribing a large panel for rows and then scribing the whole lot randomly for individual shingles. Every scribe that starts too early or finishes too late makes the end result less presentable.

In the end I’ve opted for individual shingle strips. They’re small and finicky but being the same material as the roof substrate greatly simplifies glueing them down. They’re also  lapped, giving that little bit of dimension. Although I haven’t done it to the depot yet, the combined thickness of the shingles along the gable edge can be reduced with a good sharp no. 2 barrette file to something a little closer to scale.

Before shingling could start I had to make a new roof substrate. For Grotto I used .030″ material scribed around the perimeter to represent the sofit boards. I couldn’t use scribed siding  since on the prototype the boards parallel the walls. Ten thou thick  barge boards were applied on the edge and then I tried something a little different in applying the small barge board trim. Instead of wiggling little bits of .005X.010 strip around in the air,  a gauge was made and then wide strips of .005 were fed around the roof perimeter. When things were solid I trimmed the excess with a sharp knife. I use this dodge in other realms but this was the first time I’d done it on a styrene roof. It works but it is a bit wasteful. 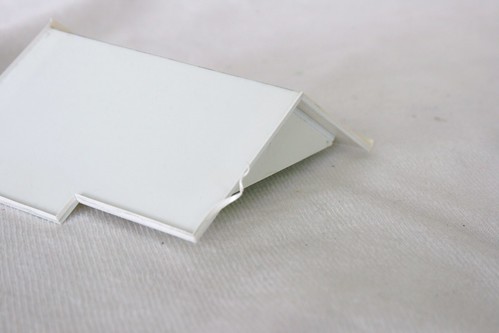 The shingle strips were made from .005″ sheet taped to a piece of ply with one edge against a stop strip and then scribed using a square. An hour or two later I cut the strips out to a height a touch less than twice the exposure. I used a partial starter strip of the same .005″ material but used half height material and then filed/ sanded a small taper to the top of it after installing. From there the shingling was just a lot of caliper and straight edge work until I got close to the top and then started from the other side and worked my way up. Doing so allows the wayward modeller a chance to even out any errors in the last 7 or 8 rows of shingles.

The photo below shows the shingles left long. To trim them I used a bit of shim placed between the barge board trim and the knife blade. 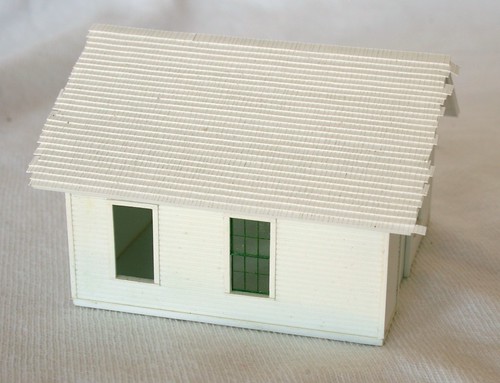 I wasn’t entirely sure what to use for the flashing but in the photo it looks like  I’ve opted for a bit of sanded down .005″ styrene. A notch has been filed for the old chimney which means I’ll be using it or one the same size. Aside from chipped paint and missing plaster “mortar” I don’t think it looks too bad. The size and shape look faithful to the prototype. Certainly looks better than that gap along the gable wall. I’ll need to investigate why the roof isn’t sitting down fully before too long. 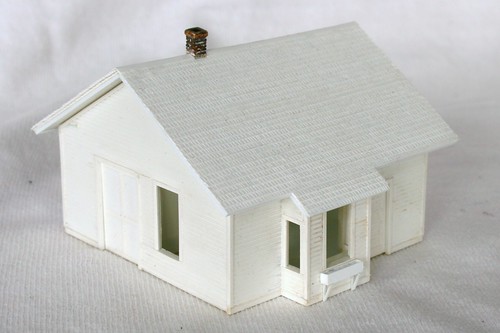