It’s been a month and my voice has returned so maybe some thoughts on VMMF2015 wouldn’t be out of order.

Having been to three or four editions of VMMF this was my first crack at the display side as part of the BCSME entourage. We were rather unprepared, in  fact several of us remarked in unison that we hadn’t really read the display guidelines – this while we were setting up on Friday evening… In any event we scraped through and had a fun time doing so. 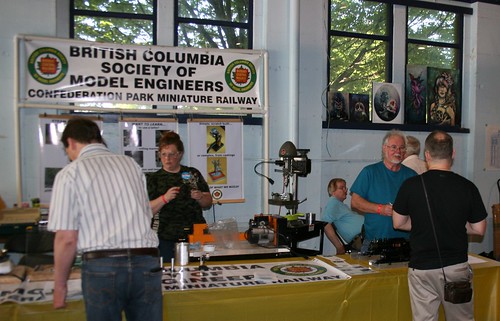 BCSME’s display featured some steam locomotives, a handful of stationary engines built in one of the club’s machining courses and a variety of typical model engineering tools for public use and display. Our fearless leader (Ian) led members of the public through the various steps involved in making low melting point metal castings while Holly and James showed members of the public how to use drilling jigs and perform basic turning. Later in the weekend Bruce had a crowd watch while he worked to diagnose a jammed cross slide on the club’s EMCO Compact 5 lathe.

For my part I attempted to make N scale brake cylinders with a stereo microscope equipped lathe. Here’s one of the handful I made: 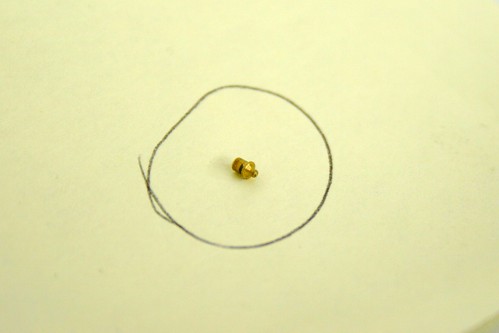 In the end I only managed to make a truck’s worth of cylinder blanks for two days work which is a decent hourly wage for sure but not really what I was aiming for. I spent the bulk of my time getting the lathe to work having spent the previous night raiding my parts collection to put the lathe together. As these things go I opted to steal a headstock/drive unit from a servo mill, and well, it didn’t mesh favourably with the metric(yikes!) tailstock’s centreline so that made drilling difficult/ impossible. By the time I had found one of my offset arbors to put that problem to  bed I was realising I ‘d forgotten to bring along the mirror crucial to reading my test indicator when it is upside down. And it just kept going like that until eventually the weekend ended. The funniest moment was after lunch on Sunday when I noticed my shadow affecting the display on  the laptop screen. Suddenly the part I was machining was visible to the general public! I assume that they had assumed that the part was just too small to render correctly. All that was needed was a 1″ piece of masking tape…

On the upside we had a constant stream of traffic. People seemed to be actually interested in what we were presenting in spite of our lack of preparation. Folk of all descriptions were interested in the melding of microscope to machine tool and what did what. I got a lot of questions about whether it was CNC or not which I guess goes with the maker territory, but hey, I’ll take it. locally it is the closest thing I have to a proper model meet where the people displaying stand a reasonable chance of being the originators of the work they show. GEARS is real but it is out of country, so I tried to make the best of the weekend. I must say it was really refreshing talking to folk who work locally be they engineers, artists or artisans. There was a sense of things happening, of work being done, and a recognition of relevant histories. Those sorts of things are important for me and frankly critical if I’m to maintain involvement in any public arena.

Next stop up is likely Oregon GEARS. I’ve already resolved many of the oustanding issues with the lathe and started to put together a little jig borer from the bits I have left over so hopefully parts can be made in a matter of minutes. A didactic has been drafted so that should help flush out the step by step nature of the job a bit better for those unfamiliar with the core concepts. One doesn’t want to leave the wrong impression about manual machining. Not these days.

I’ve included a couple of pictures below of the basic set-up I took to maker faire last month. You’ll have to ignore the micrometer thimble currently being lined and instead imagine 8 mm collets doing the work holding. As can be seen in the second image, the cross slide is a busy place! Worried onlookers need not be concerned that the microscope will fall over. In practice the stand is angled and a second clamp cinched down. For those interested, the stand is one of John Bentley’s designs and intended for the Taig lathe’s 1″ cross slide T-slot centres.  See the sidebar for John’s excellent work. 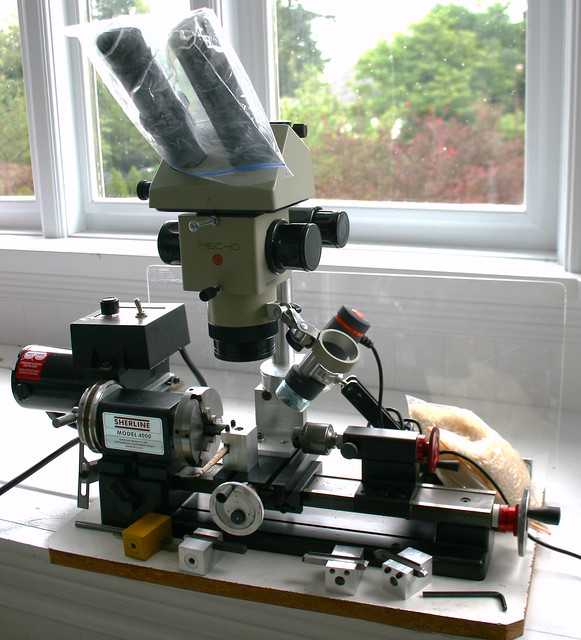 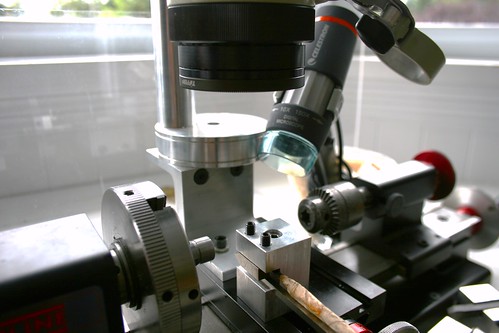