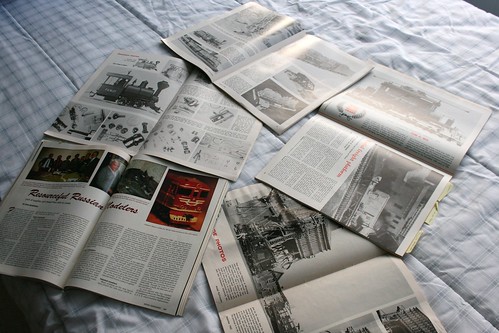 Yesterday morning I checked out a bunch of model railroad sites I hadn’t been to in months. For the most part I haven’t had a need to venture back but a friend sent me a link of something to check out. While there I figured I’d check out a few other places as well. Twenty five minutes later and I’d lost half an hour out of my life. Still the same.

A better plan if I had wanted to see railway models by model railroaders would have been to break open my cases of old Model Railroader magazines, which is what I did in the end. Forty five years ago the “golden age of model railroading” as touted by so many rivet counters today was a world away. And yet the modelling was worlds better – the actual modelling that is. Two HO finescale models with working brakes in the same issue. Two scratchbuilt 3-unit gas turbines in the same issue. Numerous homemade steamers. And then we get to 1994 and the “Resourceful Russian Modelers” article. Wow. Real modellers. Skill, will and push all wrapped up in one small group of people. 21 years later and I’m still mesmerized. These people had ideas and the grip to shape them.

Rivet counting today is usually just that – people quietly counting rivets if you’re lucky – people talking about counting rivets if you’re not. It’s the in thing at the moment, a club, a privileged clique if you will. Count the most and win a prize. It’s an embarrassment really. North America has some of the finest living miniaturists in the world and I haven’t heard any of them say that they’re model railroaders.

But this isn’t an attack writ large on model railroaders, on the enthusiastic train show hordes that everyone likes to shit on, nor is it a missile launched at the operating crowd. No this one is for the experts; the “holding the manufacturer’s feet to the fire” types, the “details matter” crowd. When people look back on this period what are they going to make of all the IKEA models? What of all the specialized knowledge divorced of measurable skill? The work that wasn’t done and the infrastructure that was left to evaporate?

I guess the most you can say about right now is that we’re pulling a pretty good vacuum.

As these things go, I was making accessories for the modules comprising the siding at Scenic and decided to make some extras as a way of holding momentum. Some of the additional parts were for Merritt, a siding and wye 14 miles east of Scenic and some were for future projects. One such project lay four miles west of Skykomish at the old town site of Grotto. Now a sleepy cluster of cabins, Grotto was once an industrial hub of the valley and  dutifully coated the surrounding area in a layer of dust resulting in interesting looking vegetation. Today you’d never no there was anything but trees and dense underbrush.

This is looking south across the mainline into the middle of the Northwest Portland Cement plant and the aerial tramway beyond that. Sixty years ago it was the largest industrial employer in the Skykomish valley.

And here in this Lee Pickett photo from the UW library collection you can see a similar view taken just a bit to the right and looking about ten degrees to the east some 86 years prior: http://digitalcollections.lib.washington.edu/cdm/singleitem/collection/pickett/id/1460/rec/1

A recent trip to the Skykomish Historical Society Museum (http://skyhistory.org/) produced a binder of “new” old pictures both of Grotto and the Northwest Portland Cement Co. plant that gave it reason to exist. Most of the overall shots of the plant layout are from the time of its construction in 1928 but there were a handful of very useful colour photographs of the plant in its final days. They illustrate changes made to the layout after the quarry on the south side of the Skykomish River played out and the aerial tram was pulled up. Among these, the most notable for my model of Grotto are the differences in the cement storage facilities, altered to reflect changes in car loading procedure as well as the rail-fed limestone business that began in the 1950s when local supplies dried up. My knowledge of the details of these structural changes is limited to what I found in the museum collection (no dimensions). Luckily fellow Goat Don Pavia was in town and suggested I check tax assessment records preserved in a local college. That sounded like it would give a good return but I couldn’t wait.

After hurrying home I drew up a plan for a section of the plant and siding that is 24″X70″.  At that size it’s just small enough to get  in my pick-up truck and in theory easy enough for one person to cart around. The first couple of nights that followed were spent making several miles of 3/4 height ties from basswood sheet followed by a meeting with the flex track committee and a sheet of foam. Eventually I settled on a version of the plan below using a leaf to represent everything in the foreground from the rock un-loader to in-bound silica, iron ore and fire brick. I don’t have accurate info on these spurs so avoiding them altogether seems like the best plan. The only modelled industry siding is for covered hopper and bag loading out-bound portland cement in boxcars. It connects back into the Mainline west of the siding.

Track test looking northwest. I found the foam and ceiling tile easily accepted pins and Atlas flextrack. In final planning the spur(s) in the foreground were changed to fork off of the through track that bends out and around and back to the main rather than having them come off the same track in what will be staging. The spur in the upper right doesn’t appear in later track diagrams, the land it occupies being taken up by a fuel dealer.

For a photo of Grotto depot during the white paint era care of Stan Styles: http://www.gn-npjointarchive.org/GNRHSDepot/GNRHS.Depot.43.62.15.jpg

Eventually this layout section will tie in with my other sidings to form some sort of model railroad but before that happens I will likely make either a pair of 2′-3′ sector plates or a temporary hidden loop to represent the mainline. Just joining it to Scenic means skipping Skykomish and tying into a much steeper grade, neither of which is very appealing. Whatever the course chosen, some form of lead will be necessary in order to switch the plant and to do anything more than stub switching of the siding. If 3′ sector plates are used at both ends I’ll be in for just under twelve feet end to end which means that the layout could be operated out of a bedroom with the door opened to allow slight intrusion into the hallway.