Warning: Making things is dangerous. Making things with pointy edges and electric power is more dangerous still. What follows is an account of what I did and not what you should do. Safety first!

In addition to making some track laying bits and bobs I’ve been spending the fall measuring up locomotives. Slowly these measurements are being transferred into cut lists and a surprising array of miniature silversteel cutters. The motivation is pretty simple: get a locomotive together to test with. After enduring the frustration of trying to alter other people’s designs and paying for the privilege I’ve decided to try out something closer to home that does what I want it to. If it doesn’t work I can always use the Kato design with my own wheels, find a different hobby, etc.

I’m in the process of seeing whether I want to make my own drive. Effort has been put into jigs and fixtures for truck making. Here’s a couple of shots of one of the eight sideframe fixtures I’ve made up with a test piece screwed down to it. This was supposed to be representative of an LFM (1) casting with flared heels on both sides near the bottom of the journals. If you notice the   little hole  in the top left of the photo – that’s where the casting flares out on this design of LFM. The holes came about as a way of minimizing the amount of profile milling to be done. It is quicker to fret out the space between holes and then trace off around the profile fixture whatever excess remains. If you’re rolling your own it’s worth noting that there are different versions of the basic casting that ended up on Great Northern geeps and F-units. Not all castings had this feature on both sides of the journal. Some didn’t have the flare. I chose to map out this design first because the GN had a lot of them and the hole locations needed drilling in the fixture to avoid bumping and breaking the small diameter drills later on when I’m less likely to be paying attention. Sideframes without the flares don’t need holes drilling but will share the same fixture. General Steel Castings and Dofasco truck castings are different enough to warrant their own fixtures but most of what I’ve seen looking at prints through a loupe is that LFM was the primary supplier used on GN locomotives.(2)

If the sideframe looks too tall  that’s because it is – it’s .250″ brass on a .250″ fixture with a little fence to capture the work piece. The idea is that the excess will be trimmed by flipping the fixture on its side when the time comes. The cutter depth is set off of the fixture side and since all eight are the same height the journal bottoms can be trimmed in a timely manner without much thought.

The brass workpiece managed to shift while flipping it over resulting in mis-registration. I followed this up with a few bad moves on the downfeed before deciding to play around with some new cutters to see what sorts of undercuts were possible. There should either be a movable stop or a dowel to keep registration intact during the various back and frontside moves but as I’ve not settled on a place to put either item I’m making do until the part has finished its cycle.

The picture above shows how I screwed up the rear face of the journal area. The real cutter for this area is much deeper with rounded corners – and – currently unhardened. Because of the crash I wasn’t able to find out if I was taking too much out of the side frame so just carried on carving out the area with  the T-slotter. Oh well, next time I guess.

And here are the cutters prior to heat treatment. On the left the .013″X.125″ T-slotter and on the right the .105″ journal rear face slot drill. All backing off except for a small flat nearest the cutting edge was accomplished in an indexing block… basically a length of square bar reamed to size and equipped with a 6-32 set screw. The cutter was repositioned using  a Mark I eyeball to roughly 8 and then 30 degrees. The last little bit of backing off is accomplished after hardening and tempering with an Arkansas stone or a little bit of fine India. On the slot drill the two cutting edges were slit (off-centre) with the stroke of a fret saw. The slot drill is supposedly plunge-cutting  but I have not tested that feature on the cutter.

The more I get into it the more obvious it is that each hole is its own job. It turns out that it is quicker to load a new fixture than to change tooling and position. While spotting is mostly done in one go together with critical items like the wheel base,  as much as possible I’m setting up the fixtures to run one type of hole (pairs as the case may be) through all eight fixtures before progressing to the next hole. It’s a lot of work, but I can’t think of another way to accomplish the task that is within the range of my ability and that works.

1.)I’m told  LFM was Locomotive Finished Machinery. EDIT: Wrong, According to page 125 of Dave Hickcox’s GN Colour Guide to Freight and Passenger Equipment it stands for Locomotive Finishing Materials Co. I should probably look it up in a Locomotive Cyclopedia to be sure.   Here’s a picture of one version of LFM cast sideframe taken at Squamish, British Columbia, Canada: 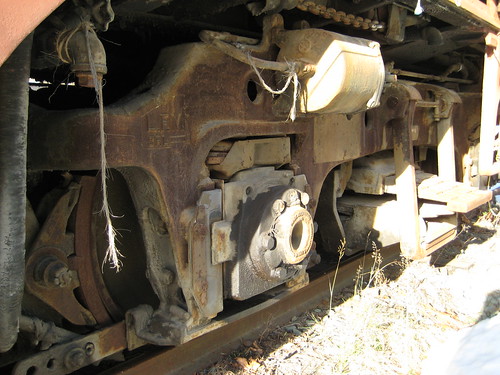 2.)  GN #692 (one of the GP9s rebuilt with dynamic brakes in 1958) displays a pair of General Steel Casting trucks taken from a Cordell Newby photograph in the author’s personal collection. Although the link is to a different image, the lead truck is clearly identified by the GSC style cast in spring hanger retainer (I don’t know what else to call it) in the link below:

GN F9B #470B has a lead truck by General Steel Casting