Going with the top rows for the 40′ deck girder.

This being a holiday, I took the opportunity to start in on BR 387. The bridge is a pair of open deck girders; one 85′ the other 40′. Umpteen years ago back when the GN goat yahoo group was the only source of info I had I posed a question regarding the bridge’s dimensions. Glen Haug very kindly provided me with most of what I needed to start the project. And so I did. You can see the result in the header. That was back in the days of my 4’X8′ layout. Sections of Atlas plate girder bridges were cropped and elongated to produce a model that fit the envelop.

Fast forward to today and I’m on version #3, version #2 being stillborn owing to poor technique. Using a modified Taig/NWSL riveter,  row upon row of rivets are easily embossed on what ever pitch and schedule I desire. Basically, If I can turn the punch and die I can emboss the rivet. No more trouble aligning rows or using registration rivets to work out offsets, the X-Y table, eliminates the need to ever reposition the workpiece. This new found utility does come at a price though for one needs to know what size rivet to emboss in the first place. Luckily there are some bridges available locally to inspect.  On my walks I’ve most often seen 1.25″ and 1.375″ rivets on bridges designed with similar load limits. If the rivets are to scale out after paint then best to make them a touch undersize. With that in mind I went with a .006″~ rivet shown at the top of the image.

First step will be to produce the top and bottom vertical chords and then fettle everything else into position.

After some deliberation and another round of consultation I took the trestle apart and started over with larger piles and cap strips. This necessitated a further round of washer and NBW punching but in the process I got better at handling and gluing them together. I’ve been using a No. 11 blade to pick the washers out of the bottom of the die, into a small puddle of solvent and then onto the model. This method seems to work alright however I need to use a glass surface in the future as puddling the glue on the brass that just happened to be handy led to  oxidation making its way into the solvent and onto the model. I can’t see it harming anything but it marrs an otherwise half decent finish. The next step will be to finish up the wood grain and cancel out as many artifacts as possible. Along the way I’ll be picking out the odd line and trying to encourage the model to adopt a more organic posture.  Then it’s to the paint booth.

Save for some touch-ups this is what the trestle will look like.

A little over halfway there with the hardware. I made two sets of punches for the washers. 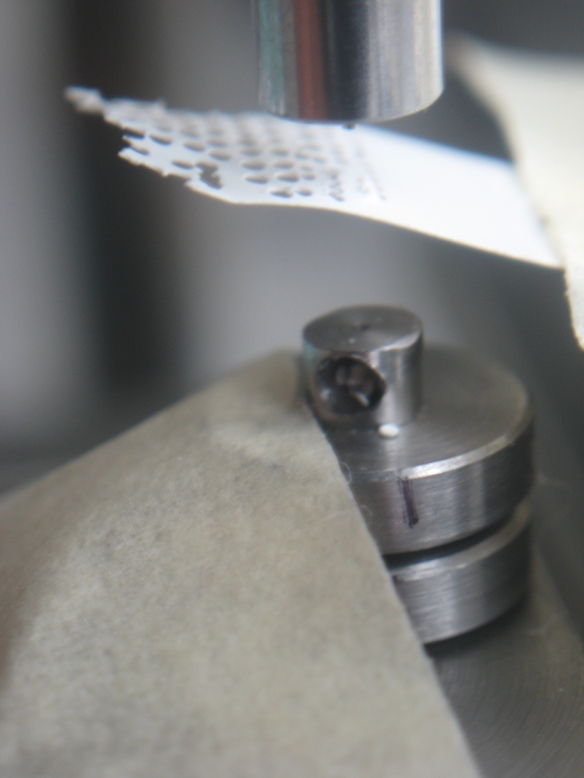 Blurry, this is a close-up of the small washer punch. The punched out washers fall out the side of the die.

Before I go too much further I’ll need to finish repositioning the far-side braces third bent in to a slightly higher location. At the time (it was the first bent braced) I was thinking the road would be at a lower elevation and that the brace would be partially buried. I’ve since changed my mind.

Well, time had come on the eastern most curved siding module of Scenic to be tracked and wired up. Trouble is, there was once a small  bridge at the upper end of Scenic just as the rails made tangent  on the run up to the depot and into the darkness of Cascade tunnel. I had long thought that the bridge (known as ballasted deck pile bridge on the accompanying AFEs) was filled in during the course of 1963. GN modeller and knower of all things Cascade Division, Bill Sornsin, found out that this wasn’t the case, that the bridge was instead filled a year later, which happens to be the year I model- 1964. Somewhat reassuringly the AFE had a low # which presumably meant the work could have been carried out earlier in the year than the fall setting I have chosen for the  layout. If that was indeed the case then I’d have nothing to fear but I suspect I might one day regret not having the option to model what must have been a neat little  bridge.  Not so secretly I’ve been contemplating a shift back to an earlier date, probably 1962, when the equipment needed to model Stevens Pass was less diverse. Were I to do that I’d need this Bridge #388 which left me with a deign and construction conundrum. 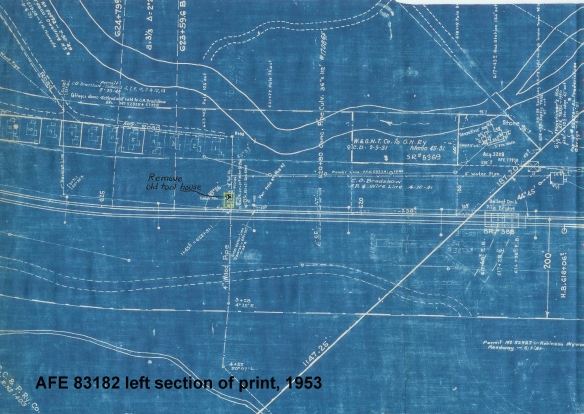 After some amount of humming and hawing I settled on a pair of removable cassettes; one with the road crossing at grade (yes, all this fuss is over a roadway) and one with a trestle serving as underpass for the dirt forestry road.  Doing so solves the issue at hand but  doubles the modelling fun. In this case the “fun”was constructing  a bridge for which I have no drawings or pictures to model from. Sure there was a picture taken from US 2 showing the hole where the road must have been – but all that did was confirm its existence and indicate it had no safety walkways – not insignificant items for sure but not enough to make a decent model from.

In any event I needed the bridge in place before the track could go into service  and even if I were to leave the bridge cassette alone until better information came along I’d still not be able to work on scenicing the other cassette or the module as a whole since the cassettes and module  have to have common side profiles all the way round to properly integrate with their respective surroundings. My solution, not surprisingly, was to press on. You never get better at modelling by not modelling. The result is the part finished trestle below. I was lucky in that I had help from a number of Cascade Division experts  who furnished me with drawings, dimensions and opinions  based on established GN practice in other locations. The trestle still needs strapping and things like nut-bolt-washer details and paint but is otherwise ready for installation.